Living in New York, it’s easy to assume that this is my hands-down favorite city, that there’s nowhere (at least nowhere in America) I would need or want to travel to get my favorite foods. Every kind of Asian? Go to Manhattan Chinatown. Or Brooklyn Chinatown. Or Queens! Queens, in fact, has just about every type of food, so why even leave that borough? High-end French? New Nordic? Deli sandwiches and bagels? We do, in fact, have it all.

But there’s a tiny little city, a few hours north, that calls me back every time. My love affair with Providence, RI, probably started when I acquired my best friend, who hails from nearby Pawtucket. After we both finished graduate school in Indiana, the most reliable way for me to see him was to hop on the Peter Pan bus from Port Authority and endure the hours-long, traffic-laden ride to downtown Providence. I’ve spent many weekends over the years writing, walking, and eating around this city, and these are the places I keep coming back to. 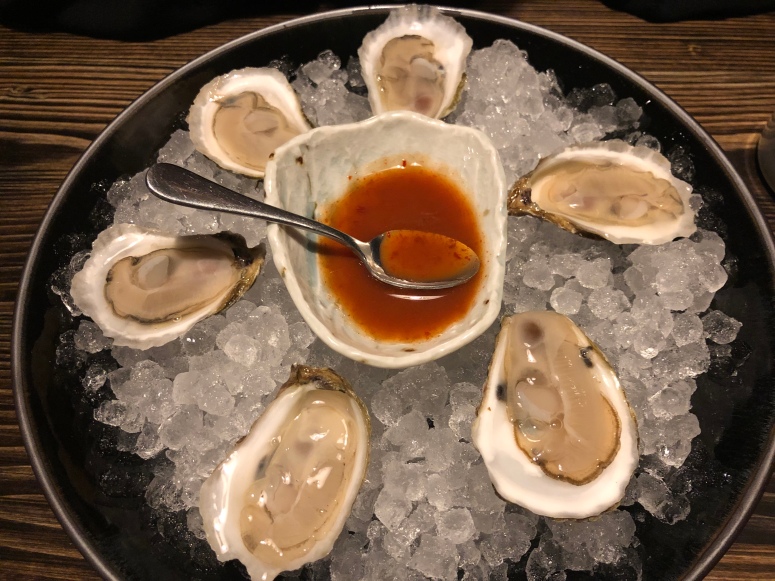 The second restaurant by James Mark of North, and located in the original North space, Big King is worth driving 3.5 hours after work for a 10:15 PM reservation — and I usually like to be in bed by 10 PM. The tiny space holds only twentysomething diners, primarily at a bar and chef’s counter. There are two booths, reserved only for parties of 3 or 4, and they are cozy AF. You basically have to have a reservation if you want to eat here, but they are available day-of if you book early.

Eating at Big King is an experience from the moment the menu is dropped at your table. For starters, the menu is actually the chef’s Moleskine notebook, with that day’s options hand-written across two pages. There are always two set menus — one larger, one smaller — and several a la carte options. It’s worth noting that you can’t get set menu items a la carte, and vice versa. Everything is good for sharing and portions are on the smaller side, so ordering just about everything on the menu is not out of the question. 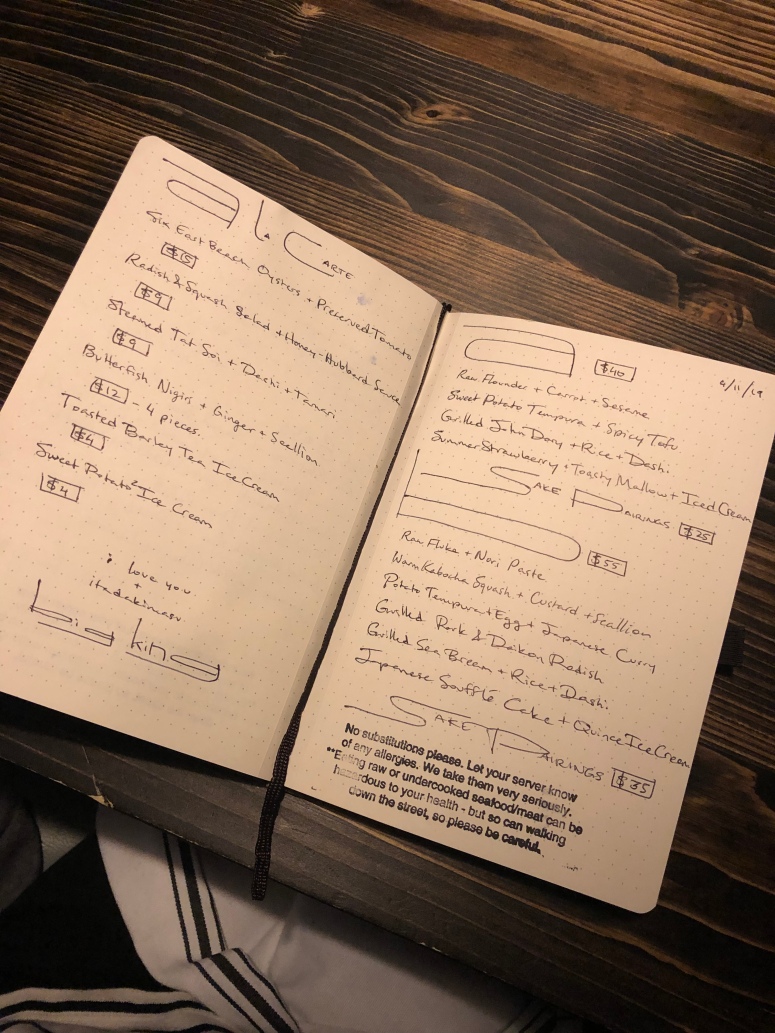 The food is exclamation-inducing. Take their pork skewers, for example. The restaurant gets a pig every five weeks or so from local farm Pat’s Pastured, and they rotate through the cuts. If you show up during week four or five, you’re likely to get a dry-aged chunk of leg that will ruin you for all other pork, forever. On my most recent visit, the server told a deliciously evil take of katsu-style pork jowl served for family meal. I want that, with a giant bowl of their perfectly cooked rice and butternut squash-infused Japanese curry, but I suspect the odds are slim.

Ellie’s is affiliated with Gracie’s, Providence’s undisputed shmanciest restaurant. While I’ve never eaten at Gracie’s, I will travel any distance to get the Ellie’s breakfast sandwich. It’s my favorite one in existence: a house-made english muffin with tomato jam, farm egg, cheddar, arugula, and sausage patty. Everything is local and fresh AF. It’s what an Egg McMuffin wishes it could be, if it got rich and woke and moved to the country. 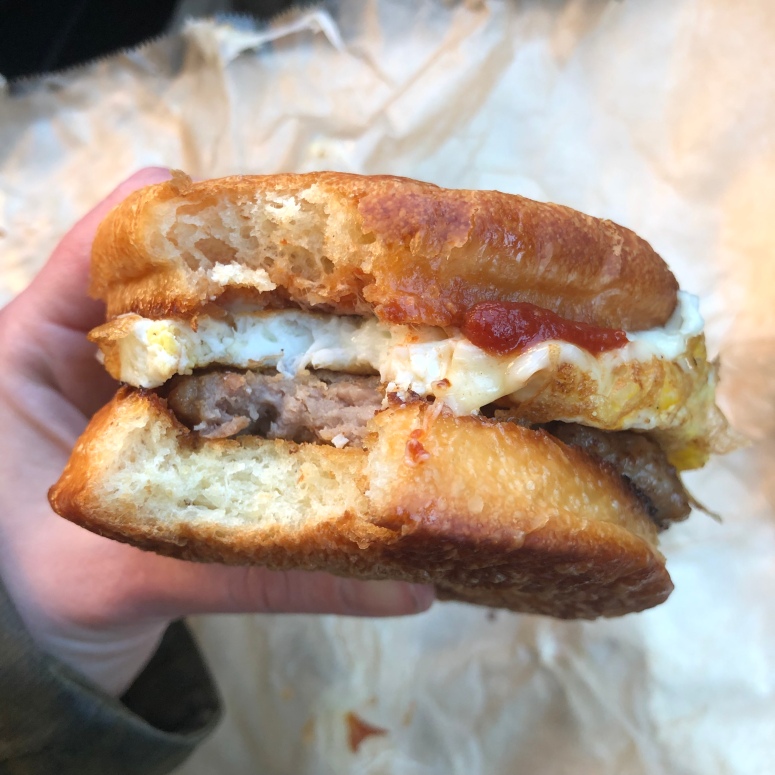 Ellie’s sweets are as good as their savories, a rare balance for a bakery to strike. The cherry-brie kouign amann, which is listed as “seasonal” but has blessedly been available on both of my recent visits across two seasons, has an entire miniature wheel of brie baked inside of it. It’s a true thing of beauty.

“The best we have to offer,” is what my bestie says of Bolt Coffee. Tucked inside of ultra-chic Dean Hotel, where I’ve regrettably never been able to get a reservation, this has some of the coziest coffee shop decor I’ve encountered. Noticing a theme? Lots of  “favorites” and “bests” await the Providence-bound foodie.

Their coffee is reliable, and they take their time. When they reach the dregs of a drip batch, they make a new pot in 5 minutes or  less rather than serving the burnt ends. They have great branding and great variety. They also serve Knead Doughnuts, in case you don’t want to walk around the corner to Ellie’s — but why wouldn’t you? 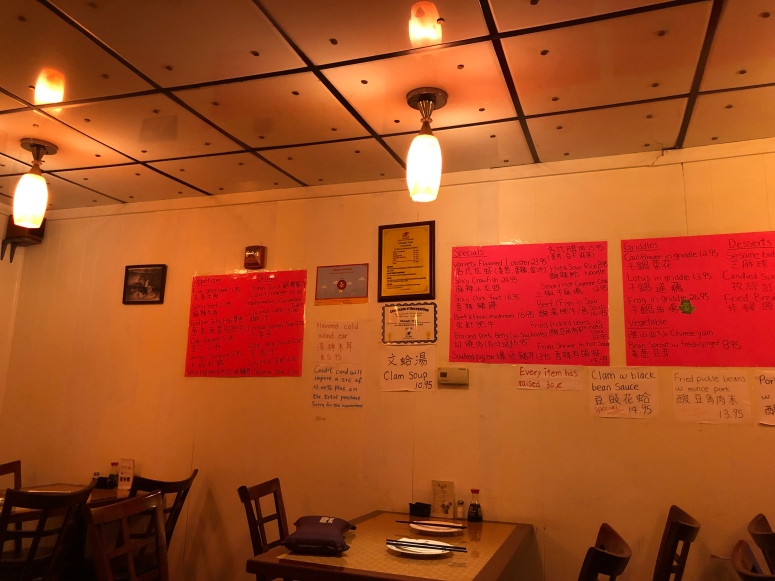 I lived in New York’s Chinatown, with a family that owned a Chinese restaurant, for years. I know Chinese food, both the Americanized favorites like General Tso’s Chicken which I am not ashamed to say that I love to some kind of ginger-encrusted scallops on the half shell that I ate in the basement of a Mott Street dive that remain one of the best things I’ve ever eaten. Chengdu Taste in Pawtucket has food that rivals anything in NYC, some of it is even better. Think: thin, velvety, room-temperature sesame noodles with just the right amount of heat; whole tea-smoked duck that I tore apart with my hands, an aroma that clung to my skin like a perverse perfume; specials written in Chinese on colored construction paper — you don’t know what it is, but you want it. 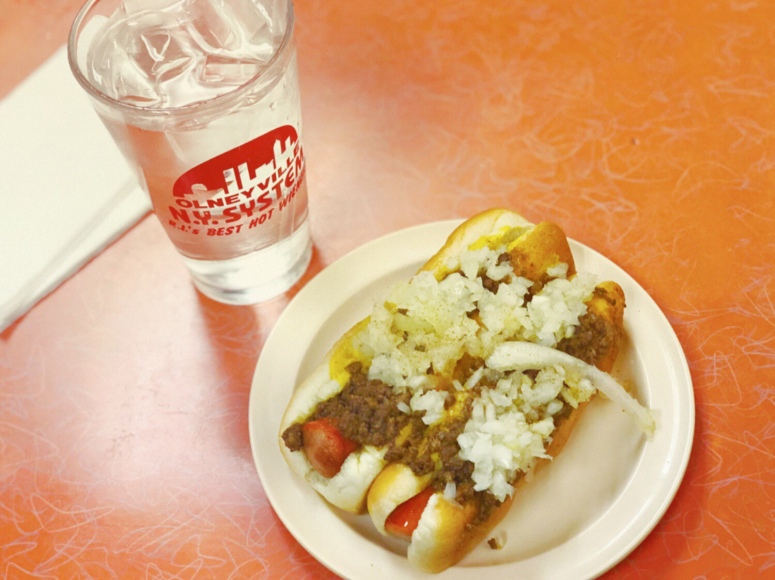 It took a long time before I finally went to this Providence institution and James Beard awarded hole-in-the-wall that sells, primarily, hot weiners. Weirdly enough, the type of restaurant is referred to as New York System, a sideways reference to Coney Island. However, these are not the Nathan’s dogs of my childhood summers in South Brooklyn. Hot Weiners are made with a particular combination of beef, veal, and pork, served in a steamed bun, and topped with celery salt, yellow mustard, chopped onion, and an intentionally ambiguous seasoned meat sauce. You’re not supposed to put ketchup on them, but I did, when the grill cook’s back was turned.

Olyneville System also serves another RI classic, coffee milk. It is what is sounds like — milk with hyper-sweet coffee flavored syrup — and it’s a weird but appropriate accompaniment to hot weiners. It’s a food to try once so you can forever impress friends with your insider knowledge of one of the best dives in America.